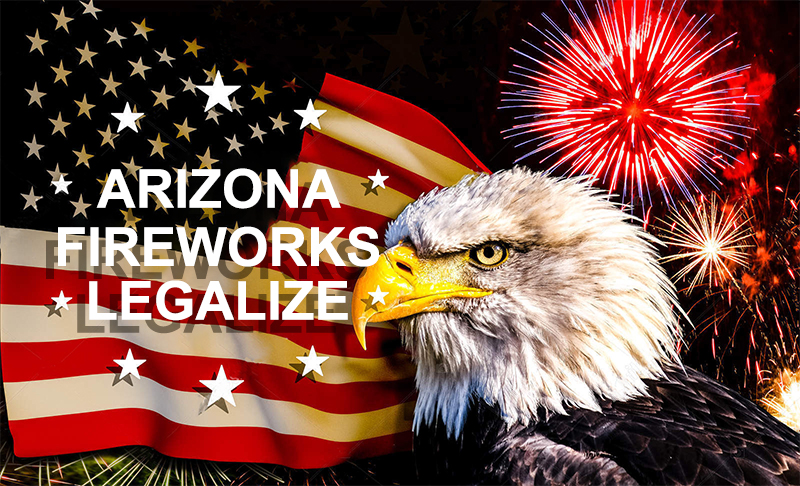 Fireworks shooting into the air could become a more common occurrence in Maricopa and Pima counties under a bill proposed at the Arizona Legislature.

If passed, Senate Bill 1334 would legalize some types of airborne pyrotechnics, which are technically prohibited now despite their widespread use.

Specifically, under the bill “multiple tube aerials” would join the list of approved consumer fireworks. These are firework “cakes” with 12 to 15 tubes that shoot rockets, one after the other, into the air once lit from the ground.

Mortar fireworks shot from a single tube would still be banned.

The bill’s sponsor, Sen. David Gowan, R-Sierra Vista, works in sales for TNT Fireworks, according to his 2021 financial disclosure statement filed with the Arizona Secretary of State’s Office.

At a Senate Commerce Committee meeting Wednesday, Gowan asked committee members to think back to New Year’s Eve and Independence Day celebrations, when aerial fireworks lit up the night skies.

Gowan said local governments “may not want this to happen and they may not want to see this expanded. Except the problem is, it already has been expanded and it’s done illegally.”

He said lawmakers should add the aerial fireworks to the list of permissible fireworks to make sure “cities and local governments are capable of collecting those dollars.”

The proposal also would prohibit temporary retail establishments from selling permissible fireworks, with the exception of retail sale stands.

Tom Savage, representing the League of Arizona Cities and Towns, told the committee the organization opposed the measure and was concerned with a possible increase in fire danger, injuries and citizen complaints.

Fireworks that explode into the air send sparks farther than some that stay on the ground. During drought, neighborhoods in other dry states like California, ban fireworks of all kinds to prevent fire.

The committee ultimately held the bill for a possible vote at a later date.

Some neighborhood groups are concerned about an expansion of allowed fireworks.

Tim Semans, former president of the Greater Cheery Lynn Neighborhood Association in Phoenix, said there were always celebrations with fireworks, whether the devices were legal or not. Semans, 57, said he likes fireworks but permitting aerials is “just not a good mix” in central Phoenix given the older population, pets and danger from dry seasons.

Novelties fireworks used for celebrations, and which are permitted at all times, include sparklers, smoke devices and drop pops while fireworks like ground spinners, sparkling wheels and fountains are only seasonal.

When officers respond to any call involving fireworks, “they attempt to contact the individuals involved to determine if the fireworks involved are legal or illegal,” Phoenix Police Spokeswoman Sgt. Ann Justus said in an email.

Justus said the department has worked through officers and social media to educate the community “on the legal and safe use of fireworks.” The Phoenix Police Department has several guides posted online for when to sell, buy and use fireworks, what types are allowed and how to avoid injury.

Purchase of fireworks outside the allowed window, or use of prohibited fireworks, can result in a fine of up to $1,000 in Phoenix.

Gowan has proposed bills like this in the past, seeking to get a particular type of firework on the permissible sale list. He’s also pushed to extend the permissible purchase timeframe to include the Hindu festival of lights, Diwali, typically celebrated in October.

While Gowan’s bill seeks to expand the use of fireworks, two bills from Democrats push for more restrictions.

Rep. Amish Shah, D-Phoenix, is proposing to prohibit the use of consumer fireworks between the hours of 10 p.m. and 8 a.m. His House Bill 2623 is scheduled for a committee hearing Monday.

Rep. Charlene Fernandez, D-Yuma, has proposed House Bill 2854 to restrict the sale and use of fireworks to the weeks around July 4. The bill has yet to get be sent to a committee.