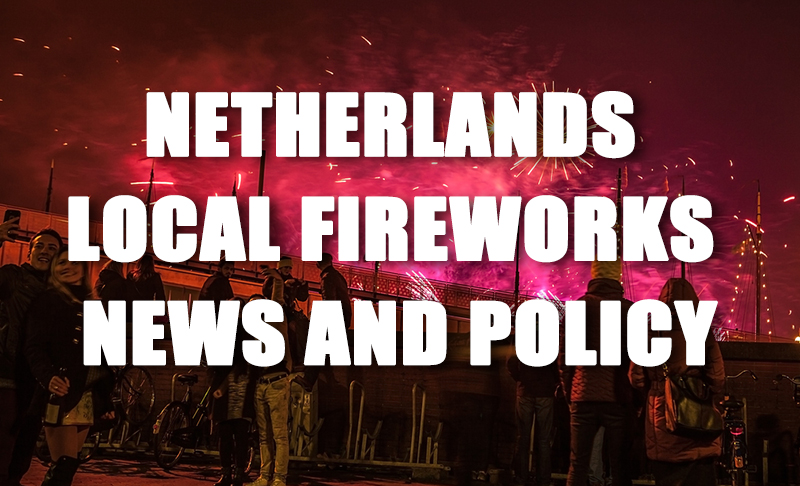 Several of the Netherlands biggest cities are pressing ahead with a total firework ban at New Year, but Amsterdam and Eindhoven have not yet finalised their position, news website Nu.nl said on Friday.

Amsterdam had previously pledged to ban fireworks in 2020 but changed its mind because of policing problems during the pandemic. The situation this year remains unclear and the city’s website section on New Year is currently empty.

Rotterdam and Nijmegen have already said they will ban consumer fireworks entirely, while Utrecht will do so next year. The Hague, Breda, Tilburg, Almere and Groningen will still allow consumers to set off fireworks, but will also expand the number of firework free zones, Nu.nl said.

A nationwide ban on the sale of more dangerous fireworks, including firecrackers and rockets, was introduced last year, and further restrictions were also imposed because of the coronavirus pandemic.

Nevertheless, the ban was widely flouted and hundreds of people were injured and dozens of cars set on fire. However, the police and the emergency services were called out some 30% fewer times than during ‘normal’ New Year celebrations, officials said.

Despite the bans the pyrotechnic sector say expects sales this year to be back at 2019 levels, when consumers spent €77m on fireworks.

Amsterdam is pressing ahead with plans to ban consumer fireworks during the New Year festivities but officials admit it would ‘not be realistic’ to imagine the city will be without them.

The aim is to ‘phase out’ the current tradition by ‘offering alternatives and using a variety of methods to counteract the use consumer fireworks’, mayor Femke Halsema has said in a briefing to city councillors.

‘The first year of the local firework ban should be seen as a year of transition,’ Halsema said. Research shows 77% of Amsterdammers consider it important to reduce the nuisance caused by fireworks and 89% never set them off anyway.

City councillors voted in favour of a ban in April last year but the idea was dropped because of the impossibility of policing during the pandemic. Local bylaws have now been amended to ban the use of fireworks, although consumers will still be able to buy them from licenced sellers.

The city is organizing an ‘spectacular’ on the Museumplein, together with festival organisers and ‘the club scene’ which will end in a firework show at midnight and a performance by a ‘really top act’. Officials hope the event will attract 10,000 people – as long as the coronavirus measures allow it.

City officials will decide in November if the coronavirus situation is good enough to allow the events to go ahead.

Amsterdam is the third of the big Dutch cities to bring in a firework ban. Rotterdam and Nijmegen have already said they will ban consumer fireworks entirely, while Utrecht will do so next year.

The Hague, Breda, Tilburg, Almere and Groningen will still allow consumers to set off fireworks, but will also expand the number of firework free zones, Nu.nl said.

Eindhoven has not yet taken a decision.

A nationwide ban on the sale of more dangerous fireworks, including firecrackers and rockets, was introduced last year, and further restrictions were also imposed because of the coronavirus pandemic.

Nevertheless, the ban was widely flouted and hundreds of people were injured and dozens of cars set on fire. However, the police and the emergency services were called out some 30% fewer times than during ‘normal’ New Year celebrations, officials said.

Despite the bans the pyrotechnic sector say expects sales this year to be back at 2019 levels, when consumers spent €77m on fireworks.

Fireworks in the Netherlands are mostly regulated by the Vuurwerkbesluit (“Fireworks Decree”), a 1993 law that has subsequently been amended many times to make the rules surrounding the production, testing, transportation, storage, trade, sale, consumption and overall safety of fireworks stricter.

During most of the year, most fireworks are restricted to usage by professionals, but there is an exception for ordinary citizens without any special training or licence to ignite fireworks during New Year’s Eve from 6 pm on 31 December to 2 am on 1 January. Especially since the 2000 Enschede fireworks disaster, and more so since the accident-laden New Year’s Eve of 2007/08,[3] public discussion on more rigorous regulation or even prohibition on (consumer) fireworks has been frequent and ongoing.

New Year’s Eve
At New Year’s Eve, ordinary Dutch citizens are allowed to light fireworks from 6 pm on 31 December to 2 am on 1 January. Fireworks need to comply to certain legal standards, and may only be sold during the last three days of the year, excluding any Sundays, at a shop that has a licence. Fireworks are often lit in the streets or in people’s backyard.

Fireworks companies
The Netherlands used to host several fireworks manufacturers, but in the late 20th century, almost all production of fireworks was moved abroad. In 2000, there were 26 fireworks companies active in the Netherlands, with branches in Leeuwarden, Appingedam, Lichtenvoorde, Tilburg, The Hague, Enschede, Leiden, Lijnden, Dronten, Lelystad and Landgraaf. 14 of these imported fireworks from especially China for sale on the Dutch market, the 12 other businesses conducted professional fireworks shows. In some factories such as S.E. Fireworks (which ceased producing fireworks itself in 1985), Chinese fireworks were further assembled in the Netherlands before being sold. Since the 1991 explosion of the fireworks factory in Culemborg, almost all fireworks companies operated outside of residential areas; S.E. Fireworks, which caused the 2000 Enschede fireworks disaster, was the last company to still be located in the middle of a residential area before a planned relocation in 2002.

Safety testing
In the Netherlands, the Netherlands Organisation for Applied Scientific Research (TNO) is responsible for safety testing of fireworks. Since 2010, safety testing of fireworks is required in the entire European Union, but companies are allowed to test their products in one member state before importing and selling them in another. A 2010 document from the Dutch Ministry of Infrastructure and Environment revealed that several fireworks importers in the Netherlands did not yet comply with the new testing regulations, but were not penalised for it because a number of companies claimed they needed more time to implement the changes, and they were granted exceptions by the Ministry. Dream Fireworks owner Frits Pen, who claimed to have had his fireworks tested in Hungary for thousands of euros, sued the Ministry for failing to punish his competitors who were allowed to import and sell untested fireworks for free. In 2014, the Ministry stated that, by then, 80% of the fireworks imported into the Netherlands had a CE marking and were being checked.

According to a 2017 report by the Dutch Safety Board, 25% of all fireworks tested failed to meet safety standards and were banned from sale.

Injury, damage and nuisance
Fireworks in the Netherlands are known to cause various negative effects to users, bystanders and people living nearby, especially around New Year’s Eve, when extra police, firefighters and paramedics are deployed to control the situation. Which measures do and do not work, and how matters may be improved without ‘ruining the party’, is subject to ongoing discussion. The negative effects of fireworks can be divided into:

Noise pollution because of unexpectedly loud explosions (especially troublesome for animals)
Air pollution because of the smoke created by fireworks (in 2008, smog by fireworks smoke caused dozens of traffic accidents, killing two people)
Injuries and fear of being hit by fireworks (either by accident or on purpose; during New Year’s Eve 2016/17, 61% of victims were bystanders, 39% were the igniters themselves)
Vandalism and accidents by (illegal) fireworks causing damage and destruction to infrastructure and property
Disruption of public order by, amongst other things, violence against public servants (police, firefighters and paramedics) using fireworks

National and European legislation
The original Vuurwerkbesluit was adopted in 1993, and was primarily concerned with environmental issues. In the wake of the 2000 Enschede fireworks disaster, the Dutch government approved new rules regarding consumer and professional fireworks on 22 January 2002, especially concerning the safety of fireworks storage. Since then, the Vuurwerkbesluit has been amended a number of additional times, including the 2014 limitation of the period during which fireworks may be lit during New Year’s Eve from 10 am to 6 pm on 31 December.[citation needed]

Since the adoption of the 2007 European Pyrotechnic articles Directive, the Dutch Vuurwerkbesluit has been amended by 2010 to harmonise legislation with that of other EU member states concerning, amongst other things, the categorisation, trade and safety of fireworks, and a common approach of countering illegal fireworks. The updated 2013 Pyrotechnic articles Directive led to another amendment of the Vuurwerkbesluit.[citation needed]

So-called “consumer fireworks” (consumentenvuurwerk or particulier vuurwerk) in the Netherlands consists of category F1 (on sale and usable throughout the year by every person aged 12 and older without a special licence or training), and category F2 and F3 (on sale the last three days of the year, Sundays excepted, which are to be lit from 6 pm on 31 December until 2 am on 1 January). Category F4 is reserved for professionals, and aside from New Year’s Eve, categories F2 and F3 are also reserved for professionals. In Belgium, Germany and Denmark, the sale of all category F3 fireworks to consumers is forbidden, but in the Netherlands, some fireworks in this category may be purchased by lay people.

Since 2011, the Dutch College of Attorney Generals has pushed for stricter European rules on fireworks, to prevent category F4 fireworks from being bought in other EU countries and smuggled into the Netherlands. Because of “flaws in the Pyrotechnic articles Directive”, there are dangers for local security and terrorist threats.

For New Year’s Eve 2020-21, the government prohibited fireworks, citing that the number of injuries would place too much stress on the healthcare system during the COVID-19 pandemic in the Netherlands.