Reducing the negative impact of fireworks and pyrotechnics on communities across Scotland is at the heart of new legislation.

The Fireworks and Pyrotechnic Articles (Scotland) Bill proposes tougher action on the sale and use of fireworks and the misuse of pyrotechnics.

The Bill follows the report of an independent Firework Review Group which recommended tightening legislation to reduce the harm fireworks can cause.

An analysis of the public consultation, published in December 2021, showed strong support for key measures in the Bill amongst those who responded.

The Bill’s proposals include:

“This Bill will ensure appropriate action is taken over the sale and use of fireworks as well as reducing the misuse of pyrotechnic devices such as flares.

“We have undertaken a significant programme of engagement and evidence gathering which has demonstrated strong public support for tougher action.

“We have already moved quickly to introduce regulations restricting the times of day and the volume of fireworks that can be supplied to the public – as well as the times fireworks can be set off.

“This Bill demonstrates our absolute commitment to further improve safety for communities across Scotland.”

“Pyrotechnics in the wrong hands can be lethal. They are inherently dangerous and their ongoing misuse is a matter of serious concern to Police Scotland. This is not only due to the risks faced by those who may discharge them, but to those around them.

“There is no safe way to operate pyrotechnics unless you are properly trained – leave it to the experts at organised events.”

“It is clear the inappropriate use of fireworks and pyrotechnics such as flares can cause harm and serious injury as well as distress people, pets and the wider community.

“In some cases, fireworks have also been linked to anti-social behaviour which can put our crews and our partners at risk whilst drawing unnecessarily on our emergency service resources. We therefore welcome measures to help keep our communities, staff and partners safe.”

“We are delighted this Bill is being introduced. Firework safety campaigns raise awareness of the hazards and provide risk-reduction strategies, but pediatrics and adult patients continue to present with severe hand and eye injuries. We believe the proposed legislation will substantially reduce both direct and indirect harm from fireworks.”

Head of Education, Policy and Research at the Scottish Society for Prevention of Cruelty to Animals Gilly Mendes Ferreira said:

Consultation on Use and Sale of Fireworks in Scotland

The proposed Fireworks and Pyrotechnics Bill is in addition to new regulations  which came into force at the end of June restricting the times of day and the volume of fireworks that can be supplied to the public – as well as the times fireworks can be set off. 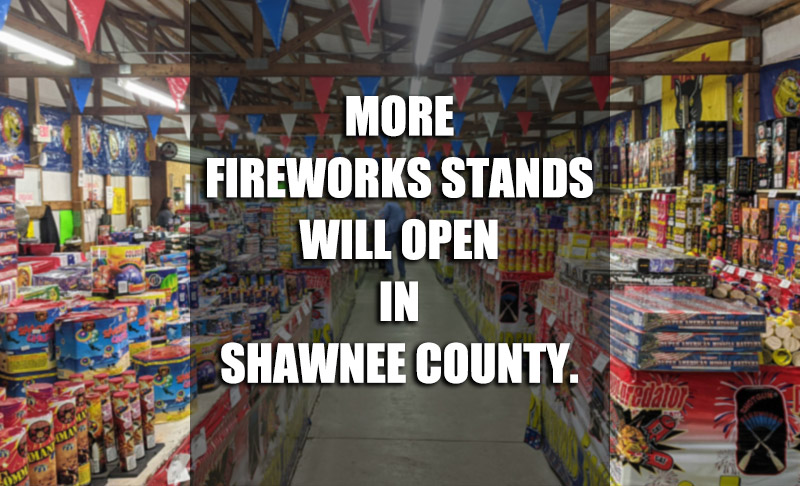 More than 20 fireworks stands approved to sell in Shawnee Co.

More than 20 fireworks stands app …by admin4 days ago