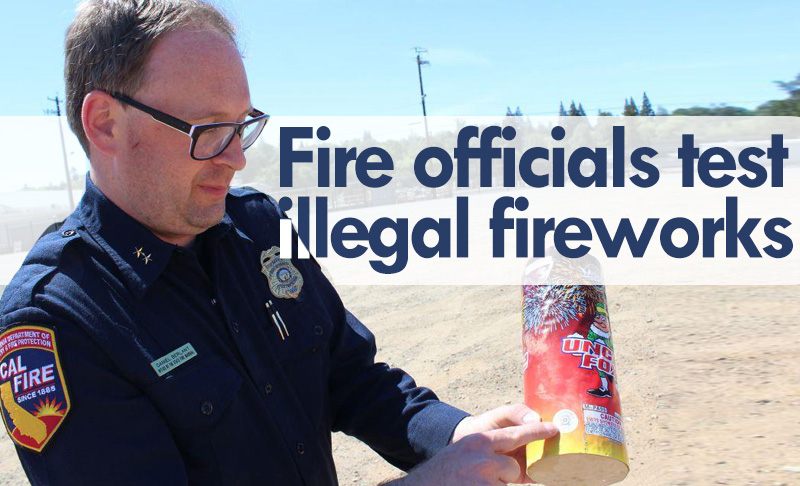 Those weren’t gunshots heard ’round Auburn on Thursday morning. There was no threat of fire, and the city wasn’t under attack – terrorist or alien.

Hey, the preschoolers at Smart Start Auburn had a great time, letting out oohs and aahs in unison as a team from the CAL FIRE Office of the State Fire Marshal, set up in the large parking lot at the Gold Country Fairgrounds, sent one illegal firework after another into the bright blue sky.

It was a good hour-plus session to test, observe, study, photograph and video the literal tons of illegal fireworks that are coming to cities throughout California – including yours and equally as likely your very neighborhood – even though July 4 is still seven weeks away.

“It will help us train the fire service teams to train the public,” said Daniel Berlant who, in addition to serving as an Auburn City Councilman, is the assistant deputy director of the CAL FIRE Office of the State Fire Marshall, which oversees the fireworks licensing program. “We need to understand. We need to familiarize ourselves, see what (the fireworks) do. This provides education on the dangers of illegal fireworks.”

Berlant was accompanied by the deputy state fire marshal and chief arson bomb investigator on a day the team chose at the fairgrounds, which is on state property, because there was little wind. Among the 20 to 30 total fireworks sampled, fuses were lit to heavy artillery known as “Skyline,” a box-shape firework perhaps a square foot in diameter that fired 33 shots, and “Fantastic Beast,” which launched 16 shots. The team also tested fireworks that fired 200 and 300 shots.

No, you can’t have one. Why? Well, one air missile dropped a piece of debris an estimated 90 feet from its launcher.

“This could still be smoldering when it hits the grass,” Berlant said.

“They’re legal in almost every state except here,” Berlant said. “We have a much more stringent requirement in California.”

Base regulations say legal fireworks can’t go more than 10 feet into the air or side to side, and they can’t move on the ground uncontrollably.

“Uncle Fox” performed like the average legal firework purchased from the local youth sports league in a shopping center, emitting the textbook shower of sparks. Sure enough, it had a safe and sane stamp on the cover.

While “Uncle Fox” was legal, the fireworks tested Thursday had been confiscated. Law requires police and fire departments to turn over seized fireworks to the CAL Fire Office of the State Fire Marshal. They are then disposed of out of state, according to Berlant.

California cities big and small have increasingly resembled war zones before, on and after July 4 over the past several years. Officials at the fairgrounds Thursday said there is a strong connection to gangs selling fireworks in California because it’s more profitable and less risky than guns, ammunition and drugs.

Berlant acknowledged an “uptick the last several years” in illegal fireworks and said he hopes people instead will settle for the city’s organized fireworks show at the fairgrounds on July 4.