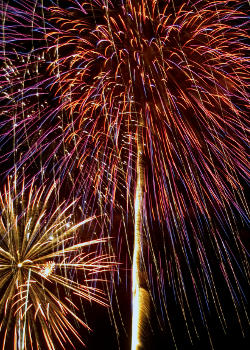 It’s just as well fireworks were invented in ancient times, because such an outrageous invention surely wouldn’t be allowed in our risk-averse society today. Just imagine if fireworks didn’t exist and someone suddenly suggested the idea of allowing people to fire lots of explosives into the air! Fortunately, that’s not the case and we can still enjoy the dazzling magic of these psychedelic aerial displays every time we feel like a joyous outdoor celebration. Fireworks teach us some interesting physics and chemistry, so let’s take a closer look at what they are and how they work!

How do fireworks work?

Fireworks can be quite complex and different types (rockets, Catherine wheels, and so on) work in different ways. Simply speaking, though, aerial fireworks (ones designed to fire up into the sky) have five main parts. Working up from the bottom to the top:

The science of fireworks

Science teachers love fireworks because they teach you about chemistry and physics at the same time, in a very dynamic and colorful way!

An exploding firework is essentially a number of chemical reactions happening simultaneously or in rapid sequence. When you add some heat, you provide enough activation energy (the energy that kick-starts a chemical reaction) to make solid chemical compounds packed inside the firework combust (burn) with oxygen in the air and convert themselves into other chemicals, releasing smoke and exhaust gases such as carbon dioxide, carbon monoxide, and nitrogen in the process. For example, this is an example of one of the chemical reactions that might happen when the main gunpowder charge burns:

What makes the different colors in fireworks? That’s chemistry too! Fireworks get their color from metal compounds (also known as metal salts) packed inside. You probably know that if you burn metals in a hot flame (such as a Bunsen burner in a school laboratory), they glow with very intense colors— that’s exactly what’s happening in fireworks. Different metal compounds give different colors. Sodium compounds give yellow and orange, for example, copper and barium salts give green or blue, and calcium or strontium make red. 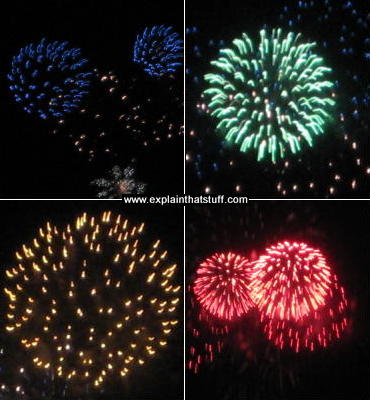 The solid chemicals packed into the cardboard case don’t simply rearrange themselves into other chemicals: some of the chemical energy locked inside them is converted into four other kinds of energy (heat, light, sound, and the kinetic energy of movement). According to a basic law of physics called the conservation of energy (one of the most important and fundamental scientific laws governing how the universe works), the total chemical energy packed into the firework before it ignites must be the same as the total remaining in it after it explodes, plus the energy released as light, heat, sound, and movement.

Physics also explains why a firework shoots into the air. The charge is little more than a missile. As it burns, the firework is powered by action-and-reaction (also known as Newton’s third law of motion) in exactly the same way as a space rocket or jet engine. When the powder packed into the charge burns, it gives off hot exhaust gases that fire backward. The force of the exhaust gases firing backward is like the blast coming out from a rocket engine and creates an equal and opposite “reaction” force that sends the firework shooting forward up into the air. 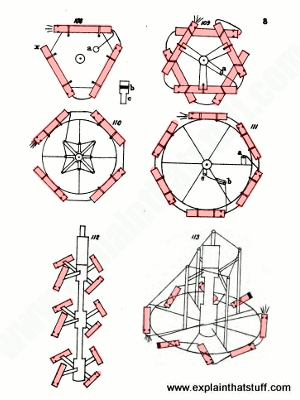 Artwork: In professional displays, fireworks can be fired singly, or connected to make spinning wheels of all shapes and sizes. Here are some examples from an old book, published in 1878, called the The Pyrotechnist’s Treasury: A Guide to Making Fireworks and Pyrotechnics by Thomas Kentish. The individual fireworks are shown in red.

Surprise and variety are the key to any good firework display: if all the fireworks were exactly the same, people would quickly get bored. Although all fireworks essentially work the same way—combining the power of a missile with the glory of burning metallic compounds—there are lots of different types. The ones we’ve talked about so far are called rockets or skyrockets and produce the most spectacular displays high in the air. Catherine wheels and pinwheels work closer to the ground. They have a number of small fireworks mounted around the edge of a wooden or cardboard disk and make it spin around as they fire off. Roman candles blow out a series of small fiery explosions from a cylinder every so often. Firecrackers are fireworks designed to produce sound rather than light and they’re often incorporated into the upper effects of rockets.

We think of fireworks as entertainment, but the same technology has more practical uses. Flares used by military forces and at sea work in almost exactly the same way, though instead of using metallic compounds made from elements such as sodium, they use brighter and more visible compounds based on magnesium and they’re designed to burn for much longer. Even in an age of satellite navigation and radar, most ships still carry flares like these as a backup method of signaling distress.

A brief history of fireworks 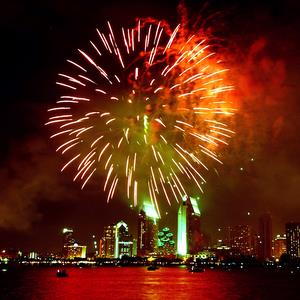 Fireworks give joy and pleasure to many millions of people every year, but they have to be treated with utmost respect because they are extremely dangerous. Consider: what you have in a firework is an explosive missile. Get too close to it and it could burn you badly, disfigure you for life, or even kill you. Every year, millions of dollars of damage is done by stray fireworks setting fire to property and there’s also the distress that fireworks cause to pets to consider.

That’s why the sale and use of fireworks is restricted by law in many countries. If you’re having anything to do with fireworks, be sure to read and follow all the safety instructions to the letter. Better still, why not leave handling fireworks to someone else? Go to a properly organized and supervised civic display and enjoy all the fun of the fireworks with none of the danger.

Find out more about firework safety from these well-prepared official sites: 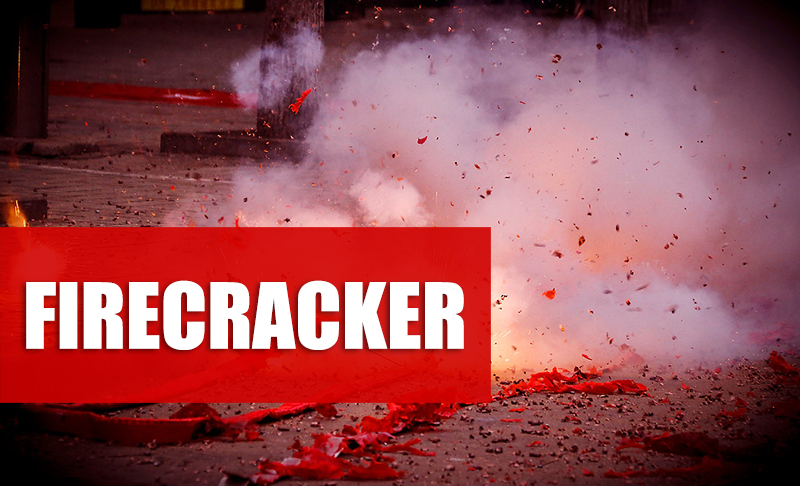 More than 20 fireworks stands app …by admin4 days ago