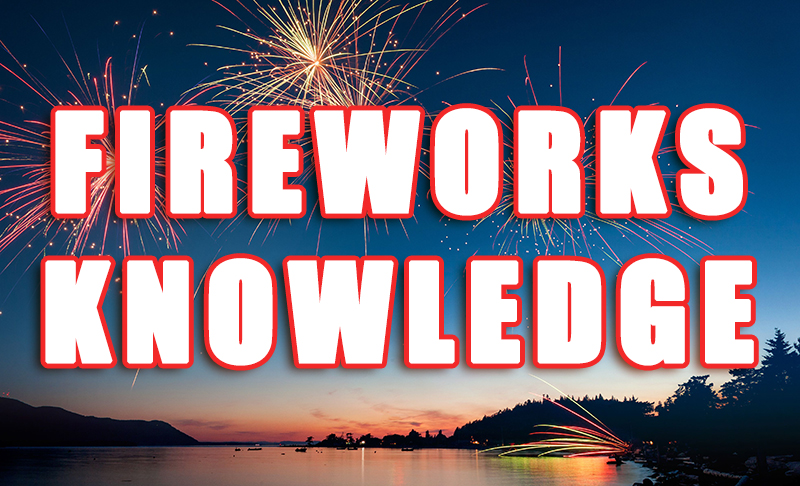 Fireworks are a class of low explosive pyrotechnic devices used for aesthetic and entertainment purposes. The most common use of a firework is as part of a fireworks display (also called a fireworks show or pyrotechnics), a display of the effects produced by firework devices. Fireworks competitions are also regularly held at a number of places.

Fireworks take many forms to produce the four primary effects: noise, light, smoke, and floating materials (confetti for example). They may be designed to burn with colored flames and sparks including red, orange, yellow, green, blue, purple, and silver. Displays are common throughout the world and are the focal point of many cultural and religious celebrations.

Fireworks were invented in ancient China in the 7th century to scare away evil spirits, as a natural extension of the Four Great Inventions of ancient China of gunpowder. Such important events and festivities as Chinese New Year and the Mid-Autumn Moon Festival were and still are times when fireworks are guaranteed sights. China is the largest manufacturer and exporter of fireworks in the world.

Fireworks are generally classified as to where they perform, either as a ground or aerial firework. In the latter case they may provide their own propulsion (skyrocket) or be shot into the air by a mortar (aerial shell).

The most common feature of fireworks is a paper or pasteboard tube or casing filled with the combustible material, often pyrotechnic stars. A number of these tubes or cases are often combined so as to make, when kindled, a great variety of sparkling shapes, often variously colored. The skyrocket is a common form of firework, although the first skyrockets were used in war. The aerial shell, however, is the backbone of today’s commercial aerial display, and a smaller version for consumer use is known as the festival ball in the United States. Such rocket technology has also been used for the delivery of mail by rocket and is used as propulsion for most model rockets.

Some of the more common color-producing compounds are tabulated here. The color of a compound in a firework will be the same as its color in a flame test (shown at right). Not all compounds that produce a colored flame are appropriate for coloring fireworks, however. Ideal colorants will produce a pure, intense color when present in moderate concentration.

The brightest stars, often called Mag Stars, are fueled by aluminium. Magnesium is rarely used in the fireworks industry due to its lack of ability to form a protective oxide layer. Often an alloy of both metals called magnalium is used.

Many of the chemicals used in the manufacture of fireworks are non-toxic, while many more have some degree of toxicity, can cause skin sensitivity, or exist in dust form and are thereby inhalation hazards. Still others are poisons if directly ingested or inhaled.

The following table is an educational guideline for the chemistry of fireworks.

A spherical break of colored stars that burn without a tail effect. The peony is the most commonly seen shell type.

A spherical break of colored stars, similar to a peony, but with stars that leave a visible trail of sparks.

Essentially the same as a peony shell, but with fewer and larger stars. These stars travel a longer-than-usual distance from the shell break before burning out. For instance, if a 3″ peony shell is made with a star size designed for a 6″ shell, it is then considered a dahlia. Some dahlia shells are cylindrical rather than spherical to allow for larger stars.

Similar to a chrysanthemum, but with long-burning silver or gold stars that produce a soft, dome-shaped weeping willow-like effect.

A shell containing a relatively few large comet stars arranged in such a way as to burst with large arms or tendrils, producing a palm tree-like effect. Proper palm shells feature a thick rising tail that displays as the shell ascends, thereby simulating the tree trunk to further enhance the “palm tree” effect. One might also see a burst of color inside the palm burst (given by a small insert shell) to simulate coconuts.

A shell with stars specially arranged so as to create a ring. Variations include smiley faces, hearts, and clovers.

A type of Peony or Chrysanthemum with a center cluster of non-moving stars, normally of a contrasting color or effect.

Kamuro is a Japanese word meaning “Boys Haircut” which is what this shell looks like when fully exploded in the air. A dense burst of glittering silver or gold stars which leave a heavy glitter trail and are very shiny in the night’s sky.

A shell containing several large stars that travel a short distance before breaking apart into smaller stars, creating a crisscrossing grid-like effect. Strictly speaking, a crossette star should split into 4 pieces which fly off symmetrically, making a cross. Once limited to silver or gold effects, colored crossettes such as red, green, or white are now very common.

A shell containing a fast burning tailed or charcoal star that is burst very hard so that the stars travel in a straight and flat trajectory before slightly falling and burning out. This appears in the sky as a series of radial lines much like the legs of a spider.

Named for the shape of its break, this shell features heavy long-burning tailed stars that only travel a short distance from the shell burst before free-falling to the ground. Also known as a waterfall shell. Sometimes there is a glittering through the “waterfall.”

An effect created by large, slow-burning stars within a shell that leave a trail of large glittering sparks behind and make a sizzling noise. The “time” refers to the fact that these stars burn away gradually, as opposed to the standard brocade “rain” effect where a large amount of glitter material is released at once.

Inserts that propel themselves rapidly away from the shell burst, often looking like fish swimming away.

A shell intended to produce a loud report rather than a visual effect. Salute shells usually contain flash powder, producing a quick flash followed by a very loud report. Titanium may be added to the flash powder mix to produce a cloud of bright sparks around the flash. Salutes are commonly used in large quantities during finales to create intense noise and brightness. They are often cylindrical in shape to allow for a larger payload of flash powder, but ball shapes are common and cheaper as well. Salutes are also called Maroons.

A mine (aka. pot à feu) is a ground firework that expels stars and/or other garnitures into the sky. Shot from a mortar like a shell, a mine consists of a canister with the lift charge on the bottom with the effects placed on top. Mines can project small reports, serpents, small shells, as well as just stars. Although mines up to 12 inches in diameter appear on occasion, they are usually between 3 and 5 inches in diameter.

A Roman candle is a long tube containing several large stars which fire at a regular interval. These are commonly arranged in fan shapes or crisscrossing shapes, at a closer proximity to the audience. Some larger Roman candles contain small shells (bombettes) rather than stars.

A cake is a cluster of individual tubes linked by fuse that fires a series of aerial effects. Tube diameters can range in size from ¼ inch to 4 inches, and a single cake can have over 1,000 shots. The variety of effects within individual cakes is often such that they defy descriptive titles and are instead given cryptic names such as “Bermuda Triangle”, “Pyro Glyphics”, “Waco Wakeup”, and “Poisonous Spider”, to name a few. Others are simply quantities of 2.5″-4″ shells fused together in single-shot tubes.

Bangs and report
The bang is the most common effect in fireworks and sounds like a gunshot, technically called a report.

Hummers
Tiny tube fireworks that are ejected into the air spinning with such force that they shred their outer coating, in doing so they whizz and hum.

Whistle
High pitched often very loud screaming and screeching created by the resonance of gas. This is caused by a very fast strobing (on/off burning stage) of the fuel. The rapid bursts of gas from the fuel vibrate the air many hundreds of times per second causing the familiar whistling sound. It is not – as is commonly thought – made in the conventional way that musical instruments are using specific tube shapes or apertures. Common whistle fuels contain Benzoate or Salicylate compounds and a suitable oxidizer such as Potassium Perchlorate. 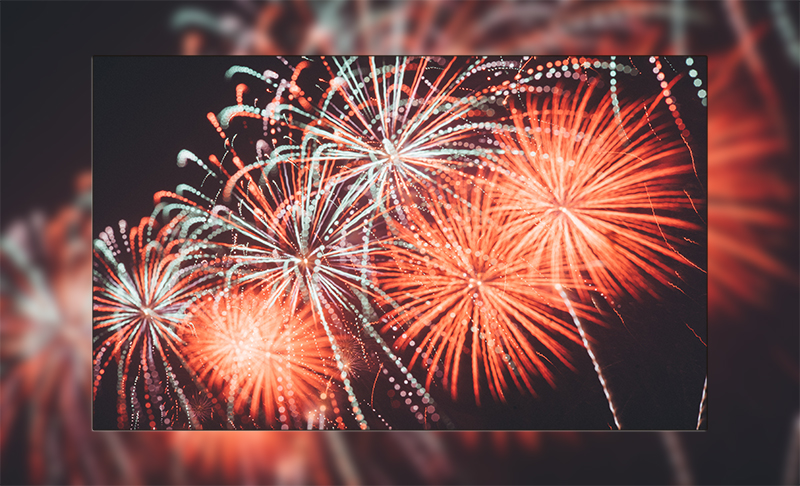