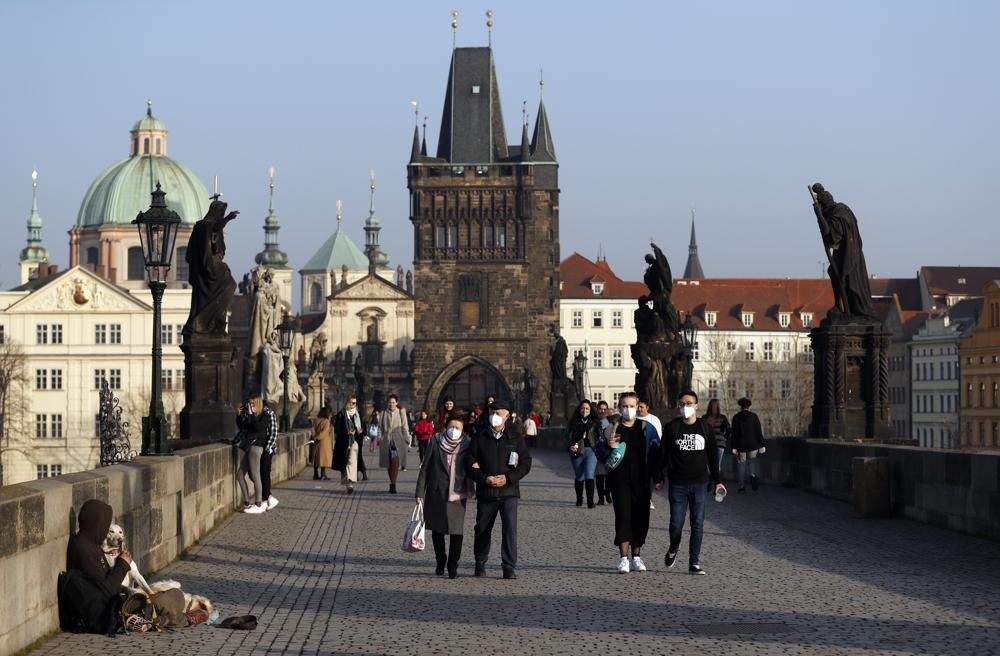 Staff in nursing homes, hospitals and private health centres will have to prove by March 15 that they have been vaccinated against the virus or face a ban on working.

The measure — which was approved by the German parliament in December — has generated backlash from dozens of medical workers.

Germany is also currently debating a nationwide vaccine mandate that would come into force in October.

More than 240,000 new daily coronavirus cases were registered in the country on Friday, although this is the first weekly drop in infections in 2022.

German Chancellor Olf Scholz has stated that the peak of infections is “in sight” as he faces growing pressure to ease restrictions.

“We can envisage a first step of reopening at the meeting with federal state leaders next week,” he told the German parliament on Friday.

Czech Republic latest to lift most restrictions
People in the Czech Republic no longer have to show COVID passes from Thursday to gain access to bars, restaurants, cafes and hairdressers, as well sports and cultural events.

It comes after the Czech government moved forward on Wednesday with easing coronavirus restrictions.

Prime Minister Petr Fiala said his government will lift further measures this month, depending on the development of the pandemic, with the majority of restrictions removed by March 1.

Czech Health Minister Vlastimil Valek said that — from February 19 — up to 5,000 people will now be allowed to attend concerts and sports competitions, up from the current 1,000.

The government had previously decided to end mandatory coronavirus testing at schools and companies.

Coronavirus cases have fallen from a daily record of over 57,000 on February 1 to 37,600 on Tuesday, still the seventh highest daily increase since the beginning of the pandemic.

The Czech Republic has registered 3.3 million infections and 37,612 virus-related deaths during the pandemic.

The nation of 10.5 million has over 6.8 million people fully vaccinated and almost 3.9 million who have received a booster shot.

Sweden enters ‘new phase’ of pandemic
Elsewhere in Europe, Sweden lifted almost all of its anti-Covid restrictions from Wednesday, as the pandemic enters what’s described as a “new phase” with the dominance of the contagious but apparently less severe Omicron variant.

Among the changes, bars and restaurants are longer required to close at 23:00 and the rules on gatherings will be eased.

Vaccination passes will no longer be required to enter public venues, while the recommendation to wear a mask on public transport during busy periods has also been removed.

“The pandemic is not over, but we are entering a whole new phase… knowledge has improved… several studies show that Omicron leads to less severe disease,” Prime Minister Magdalena Andersson said last week.

Even though the Omicron variant has caused a spike in infections, it has not translated into an increase in hospitalisations in Sweden. More than 83% of the population over 12 years old have received two doses of vaccine to date, and just under 50% have had three doses.

If “the overall assessment shows that we can start to return to normal”, the government “will continue to be vigilant as to the evolution of the pandemic”, said Swedish Health Minister Lena Hallengren.

A return to the workplace will be gradual, as will face-to-face teaching in higher education courses. The recommendation to stay at home for people displaying COVID symptoms remains in place.

Some recommendations remain in place for the unvaccinated – such as avoiding indoor crowds.

Last week, Denmark became the first EU country to lift almost all coronavirus restrictions. It was quickly followed by Norway, where Prime Minister Jonas Gahr Store said society had to “live with” the virus.

Danish authorities now say they are considering “winding down” the country’s coronavirus vaccination programme in the spring “due to the large population immunity.”

“The very high vaccine coverage in Denmark, especially with the third shot, means that we can cope with the increasing infection without getting serious illness,” the Danish Health Authority said in a statement.

Face masks would no longer be mandatory outside while nightclubs would also reopen, the Italian Health Ministry announced.

But the wearing of masks in closed places remains compulsory for the time being, at least until 31 March.

Visitors to nightclubs will still require a vaccination pass to enter, while the capacity for venues is also limited to between 50% and 75%.

More than 91% of Italian citizens aged over 12 have received at least one dose of a COVID-19 vaccine, while more than 35% of children aged 5 to 11 have also been inoculated.

Meanwhile, the French government has also stated that facemasks will soon no longer be mandatory in public places where the vaccine pass is needed, the government said on Friday.

The new measure for bars, restaurants and cultural venues is set to be introduced on 28 February.