These are 11 of the world’s most spectacular firework displays

Fireworks have been captivating people around the world for centuries and every year the fireworks seem to get bigger and better. From New Year’s Eve to the Fourth of July, there are endless places where you can go to watch a dazzling display of kaleidoscopic colours. But where are the very best? We’ve rounded up 11 of the top firework displays around the world you won’t want to miss. 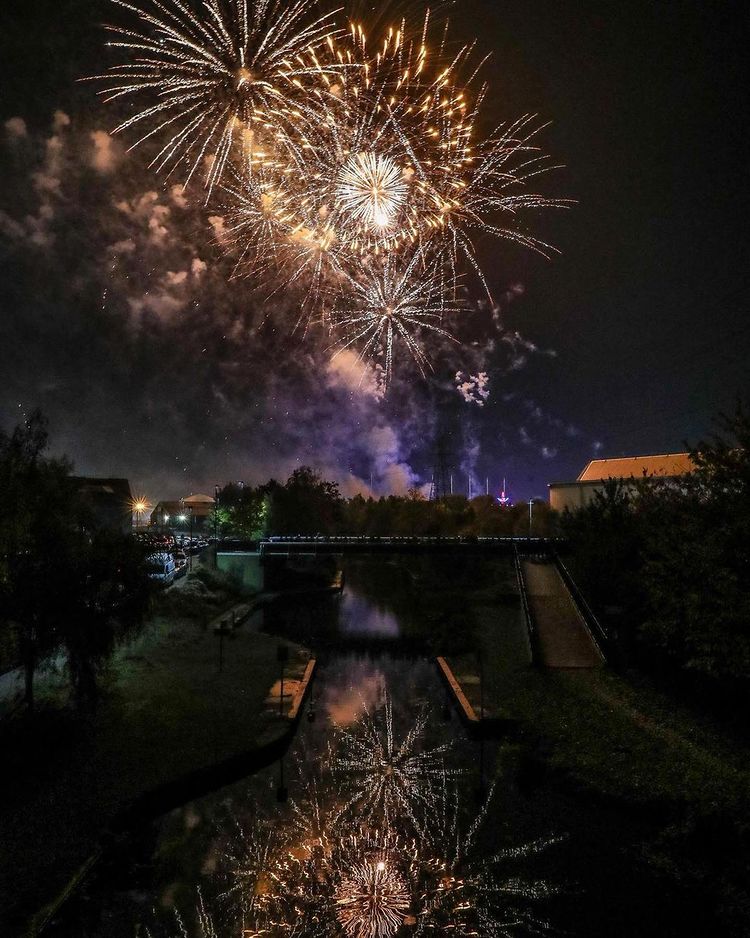 Guy Fawkes Night, or Bonfire Night, is held every year on November 5 in the United Kingdom. The event is held to remember the gunpowder plot of 1605 when Guy Fawkes and his fellow conspirators were caught trying to blow up the House of Lords. Originally, the day celebrated the foiled plot with people burning fake Guy Fawkes on a bonfire. Today, people don’t celebrate the execution of Guy Fawkes but celebrate with massive firework displays all over the UK. Sheffield, England, is particularly famous for its firework displays, with thousands of people coming to witness the show every year. 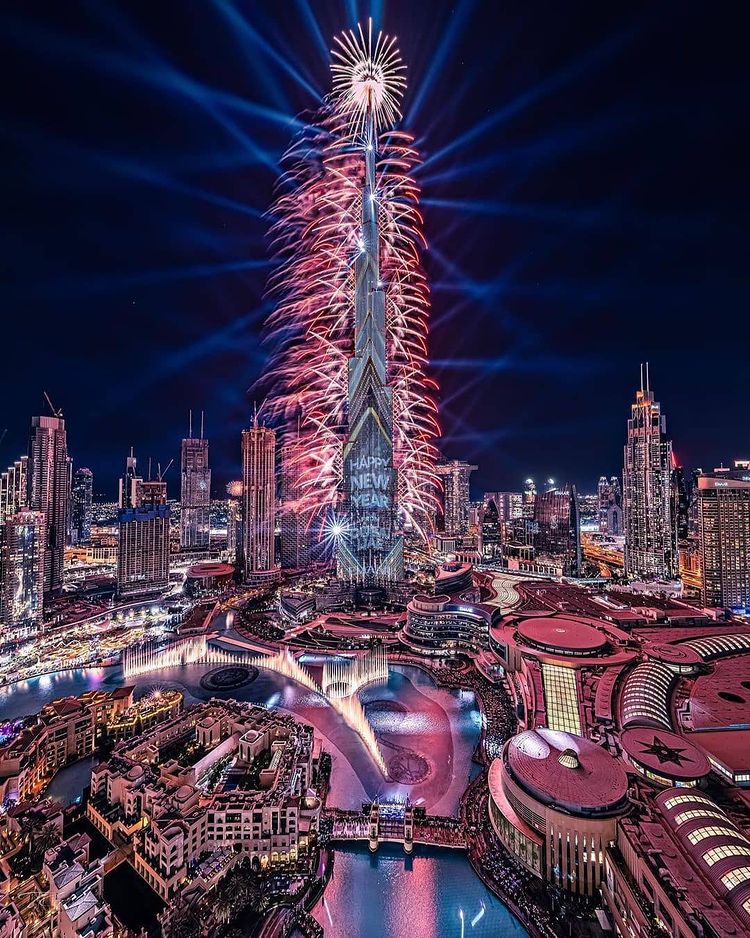 If you’re looking for the biggest and the best firework displays, you can’t go past Dubai’s New Year’s Eve celebrations. The city holds the Guinness World Record for the world’s biggest fireworks display, and no expense is spared for the event. The fireworks are set off from the Burj Khalifa, the world’s tallest building, so you can see them from almost anywhere in the city. It’s truly incredible to watch the fireworks cascading down the giant building. With an awe-inspiring explosion of over 500,000 fireworks, LED lights, and laser beams, this is one phenomenal show. 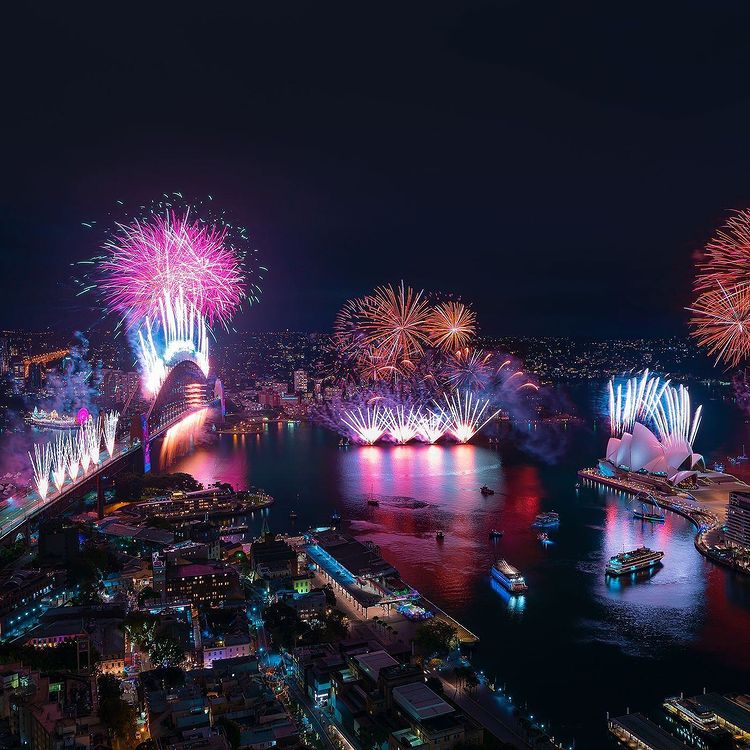 Sydney is not only one of the first cities in the world to ring in the new year – it’s also one of the best. The city puts on an incredible show on 31 December every year. It kicks off with music, decorative boats, and aeroplane shows before Sydney Harbour lights up with a magnificent firework bonanza at midnight. Over a million people come to the harbour every year to marvel at the show, as explosions of bright lights cascade over the water and the Sydney Opera House.

The display lasts twelve minutes to represent the twelve months of the year, and a new theme is chosen for the firework display every year. In 2017, a rainbow firework display was set off to celebrate the legalisation of same-sex marriages. While this famous spectacular is televised across the globe each year, if you want to see it in person, you’ll have to arrive early at Circular Quay or the Opera House to snag the best spots. 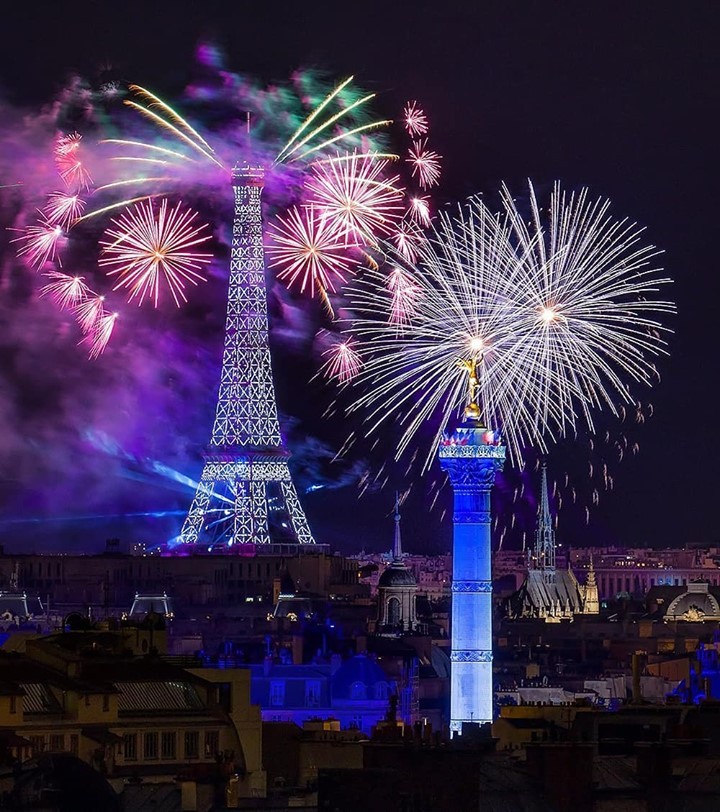 Bastille Day commemorates the storming of Bastille prison in Paris on 14 July 1789, one of the most important days in the French Revolution. The day is celebrated across France with parades and parties, ending with a massive firework display over the Eiffel Tower. Millions of people flock to the Eiffel Tower and Champs de Mars gardens to see the spectacular show, but you’ll have to get there early to get a good spot. The display has a different theme every year, with past themes including everything from liberation and peace to disco and the Olympics. One thing is for sure – you’ve never seen the Eiffel Tower like this! 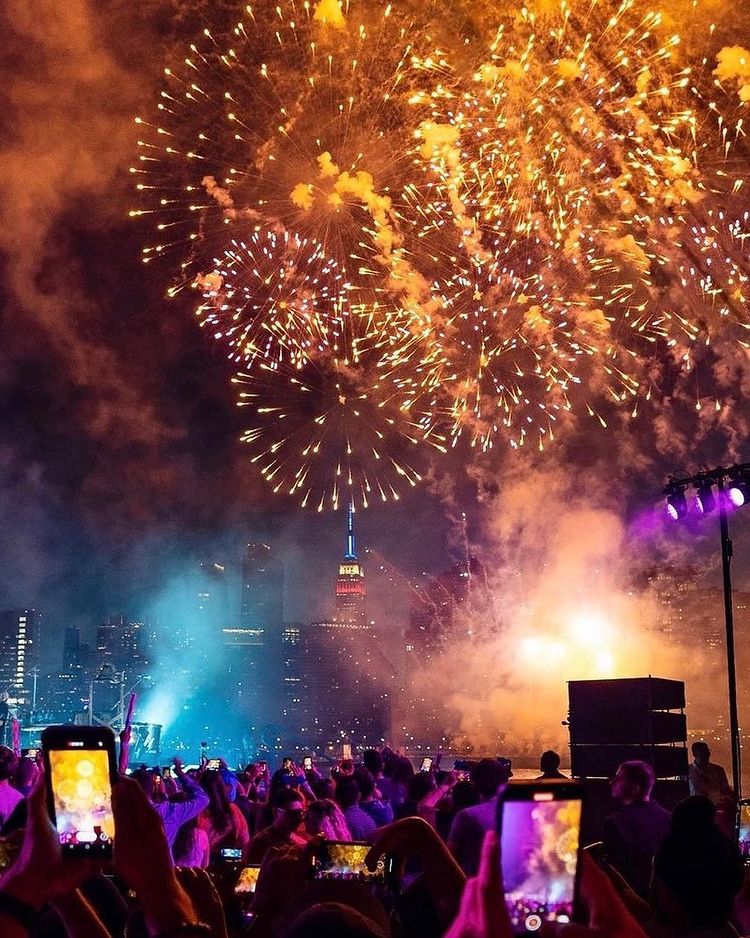 The Fourth of July is a huge deal in the USA with firework displays in most major cities… And you’ll find one of the very best shows in New York City. The annual Macy’s Fourth of July firework display lasts for 26 minutes with over 75,000 shells set off from six barges from 18th street to 43rd street along the Hudson River. The fireworks shower over the city, shooting up to three times the height over the Statue of Liberty, and it’s a breathtaking way to celebrate Independence Day. 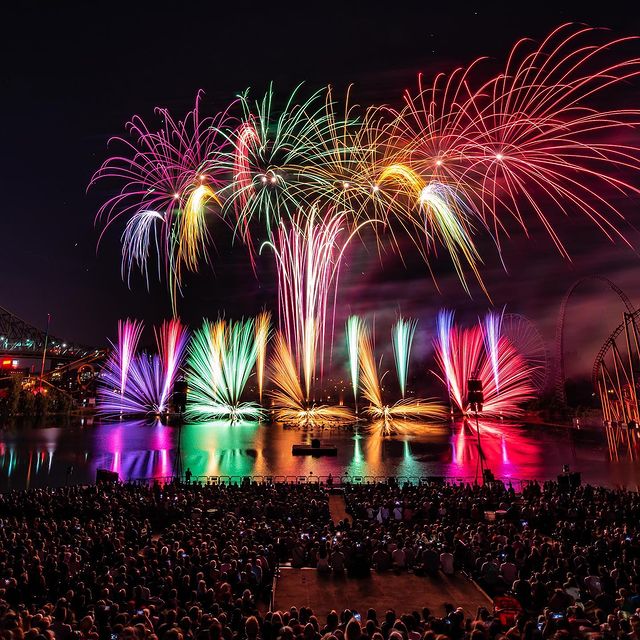 If you love fireworks, you’ve got to head to Montreal. The L’International des Feux Loto-Québec is the largest fireworks competition in the world, held every July. Pyrotechnic companies from all over show off their best fireworks all choreographed to pumping music. Millions of spectators flock to the month-long festival and while you can buy tickets to get the best views, you can also find a spot along Saint Lawrence river or Mount Royal Park and enjoy it for free. 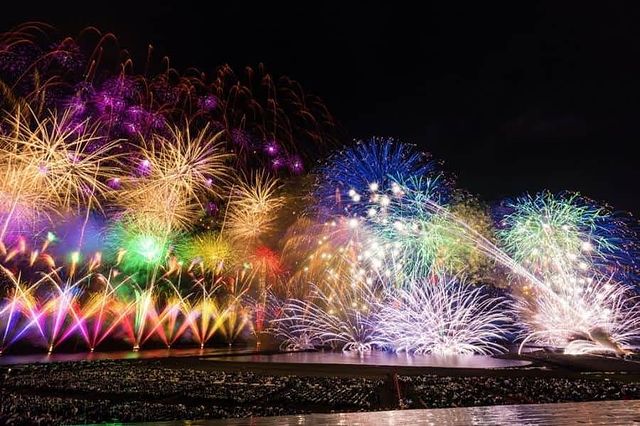 The city of Niigata in Japan is famed for having not one, but three, major firework festivals every year. The dazzling trio includes the Katakai, the Gion Kashiwazaki, and the Nagaoka Fireworks Festivals.

The Katakai Festival kicks off every September and is one of the oldest firework festivals in the world, running for over 400 years. Katakai also holds the Guinness World Record for setting off the world’s biggest firework, the Yonshakudama. This enormous rocket launches every year and is over 1.2 metres wide and shoots 823 metres into the air. It even explodes almost 800 metres wide!

Meanwhile, the Gion Kashiwazaki Festival is famed for its massive fireworks show over the ocean. And the Nagaoka Fireworks Festival sets over 20,000 fireworks over two nights every summer. 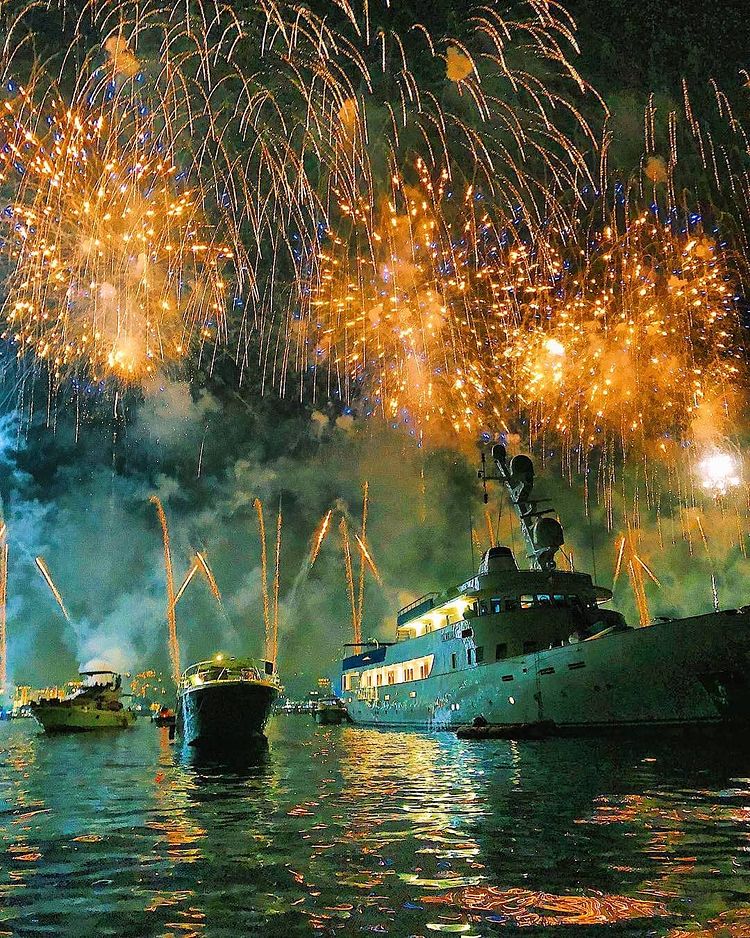 If there’s any festival to rival the Cannes Film Festival for the most glitz and glamour, it’s this one. Set along the Cote d’Azur, the Festival d’Art Pyrotechnique serves up six incredible nights of fireworks every summer. Over 200,000 people come to watch competitors showcasing their art, with each firework display running for 25 minutes. You’ll be blown away! 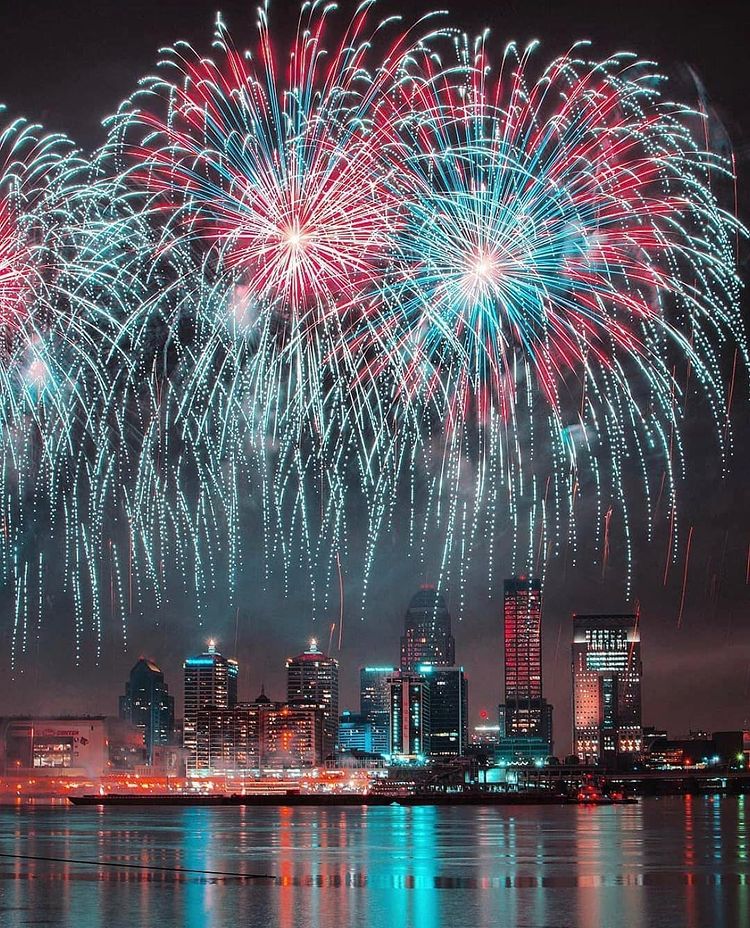 As one of the largest firework displays in North America, this incredible event is one for the bucket list. While the fireworks show kicks off the Kentucky Derby Festival in May each year, the fireworks now seem to attract more attention than the derby itself. Over 650,000 spectators come to see the fireworks display which lasts for around 30 minutes. Thousands of fireworks launching from eight 400-foot barges on both sides of the George Rogers Clark Memorial Bridge… Impressive! 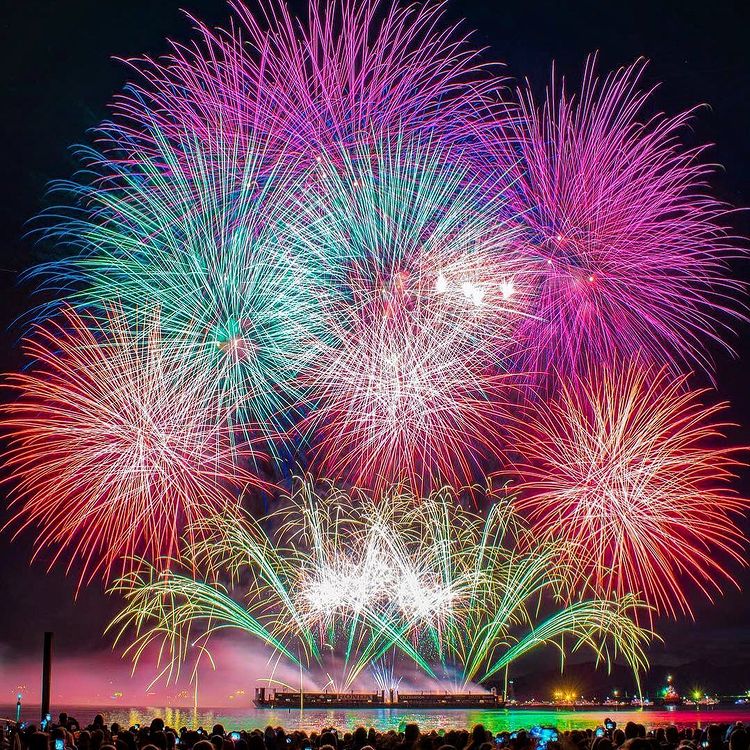 If you’re a fireworks fanatic, you’ll love the Celebration of Light in Vancouver. The city has held the festival in English Bay every July for almost three decades… And it’s all about dazzling fireworks choreographed to pumping music. Over a million people arrive at the waterfront every year to see the show, with three 25-minute firework displays held over three different days. 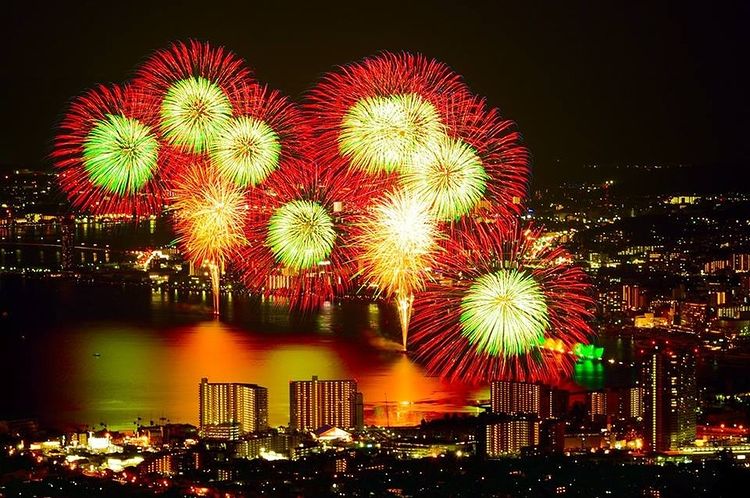 Lake Biwa is the largest lake in Japan… And it’s also the home of one of the most spectacular firework displays in the world. The festival sets off over 10,000 fireworks and choreographed water jets, creating stunning reflections on the surface of the lake. Over 350,000 people flock to the festival each year, and while you can buy tickets to the best seats, there’s also plenty of free spots to watch the show. The festival also has a different theme each year, and ‘Sengoku Wonderland’ is the theme for the 2021 extravaganza. 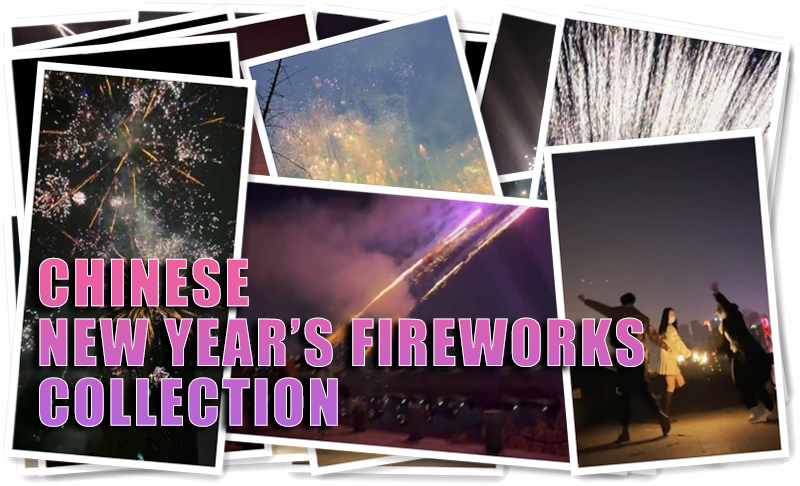