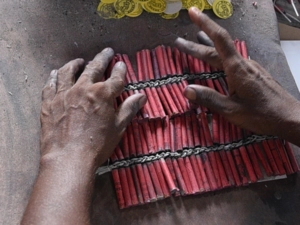 A Robot. Anyone seeing him at work may easily mistake him for a machine in action, picking up small, shining white packs of chemical compounds and wrapping them up in jute thread in a jiffy, all along moving his head up and down in rhythmic motion. Kanirasa, the 40-year old man, never went to a gym, it is his work that has sculpted his biceps.

Once dyed green and after insertion of a wick, ‘Atom bomb,’ a favourite of teenagers during Deepavali will be ready and Kanirasa, who could churn out over 3,000 pieces, in about six to eight hours is part of the Atom Bomb team. Welcome to Sivakasi in southern Tamil Nadu, the fireworks hub of the nation where workers sweat it out in factories to produce firecrackers for Deepavali.

People dependent on this industry hope that the national capital territory government would reconsider its decision, keeping fingers crossed that no state should follow Delhi’s move against firecrackers.

Days ago, the Delhi government banned sale, use, storage of firecrackers for the festival of lights over pollution concerns.

“What is the basis of Delhi government’s ban?, we were allowed to manufacture and now suddenly they have come up with this decision,” says President of Tamil Nadu Fireworks and Amorces Manufacturers Association (TANFAMA), P Ganesan questioning Delhi’s rationale.

The production is in strict compliance with government norms and by following Supreme Court’s directives including those related to green crackers, he says. Last year, following the first wave of the COVID-19 pandemic, states including Rajasthan and the Delhi government banned fircrackers. At least seven states including Rajasthan and Delhi have unsold stocks worth crores and “we request the Delhi government and all others to allow use of firecrackers as per norms on Deepavali for two hours,” the TANFAMA chief told PTI. It is very important that such markets exhaust stocks so that they “could come to us for the next season and we are not expecting business from such regions now.”

This year Deepavali will be celebrated on November 4.

The firecracker industry is estimated to be around Rs 6,000 crore out of which Delhi National Capital Region’s share is around 15 per cent, that works out to Rs 900 crore, says Ganesan.

Factoring in aspects like the unsold inventory in places like Delhi, the production this year is approximately 25 crore kilos, which is about 30 per cent less than usual, he says.

“The pandemic was also a factor that led to productions cuts.” As many as 1,070 manufacturing facilities of various sizes and over a 1,000 traders of firecrackers function in and around the Virudhunagar region of Tamil Nadu including Sivakasi, the fireworks nerve centre.

Raju of Vimal Fireworks Factory says “by this time of the year, the dispatches should be going on in full swing, but that is not the case now.” Raju says the cycle of payment for supplies made is badly stuck and there is a dip of at least 40 per cent in fresh orders for them. “The stock movement is very sluggish in Andhra Pradesh and Karnataka markets as well.”

When asked on business this year, G Selva Ganesan, who runs a wholesale cum retail outlet at Paraipatti in Sivakasi, he came up with a rather simple, but impressive answer. “Sivakasi’s market place and the thoroughfares are the best indicators of brisk business. In case we had good business, you will not be able to even walk or cross any of these stretches as workers will be busy loading innumerable trucks. Did you see any significant cargo traffic here? Truck operators and loaders here don’t get much work from us,” he says. “Usually, we get orders from a slew of people collecting Deepavali Fund to distribute crackers. Now, there is no orders from them too.”

Some firms and individuals in Tamil Nadu collect voluntary contributions through the year to give away firecrackers ahead of Deepavali (and other items to participants of the fund drive) at a cheaper price as they would be purchasing in bulk. The seemingly lull scenario in the firecrackers industry has led to cyclical developments as well.

P Rangabashyam of Sapthagiri Packs, a Sivakasi based manufacturer of corrugated boxes said that for months together there were no fresh orders from makers of fireworks.

“Since 50 per cent of our business is from the food industry, we managed to an extent, but several units that solely depend on them are the worst hit.” On the whole, Rangabashyam says his business saw a 60 per cent cut in orders from firecracker makers and only from last month his company is getting orders from makers of firecrackers. “I understand that these fresh orders are to cater to the Tamil Nadu market,” he says.

S Siva Subramanian, who owns an offset printing factory catering to the fireworks industry has a similar version. “Over-time” work is an important part of earnings for workers, but “we could not give them extra work at all. It is true that there is a lull in business.”

While fireworks makers and others rue the losses, workers continue their job despite it being really hard. After Kanirasa completes his task, his colleague, a woman, deftly uses a needle to pierce the jute thread bundle and get to the small, white chemical-pack to fix a wick and the atom bomb is ready ! Asked how she does the tough job so quickly, she replies, “it is muscle memory that helps, I could plant over 2,000 wicks in a matter of few hours.”

S Velsamy, a veteran worker in fireworks industry says that people like him already lost income due to the pandemic since factories were shut for sometime and the current ban is of “concern as it may have a ripple effect for us all.”

“We are dependent on this industry. We are skilled only in the manufacturing process of firecrackers,” he says and naively asks whether, “some state governments contemplate banning fireworks like last year.”

Industry insiders claim that a total of about 8 lakh people in and around Virudhunagar district, directly and indirectly depend on the industry for their livelihood. This includes three lakh workers in firecracker manufacturing units alone, a majority of whom are women. People in the industry and those in allied sectors want the Delhi government to reconsider its move and say that if “others (state governments) are to follow suit, we will be doomed and that is why it is crucial that Delhi does a rethink.”

The industry is already facing sluggish business, in part due to the pandemic and if governments were to bar firecrackers, it would cause serious trouble, they said.

Government sources in the district said only around 80,000 to a maximum of one lakh people are in the organised fireworks manufacturing industry -in about 1,000 units- with a Provident Fund and Employees State Insurance Corporation cover.

Firecracker traders and manufacturers pointed out that many business people in Tamil Nadu and elsewhere, who usually put up firecracker stalls ahead of Deepavali are undecided on doing business this year as they feared losses in the event of a third wave of the pandemic.

“The real business is yet to start,” they say adding a fear over a third wave of pandemic is among the key factors, according to them. No wonder, a chunk of wholesale outlets on a stretch of about 30 kilometers, right from the Virudhunagar Highway on the one end and the road towards Sattur on the other end of Sivakasi, are as quiet as a mouse.